Over the last couple of days I’ve been watching the Facebook updates rolling in. I wanted to see what other sources I respect had to say about the updates.

I’ve seen what Mari Smith had to say about it, as well as The Social Media Hat and Jenn’s Trends and so far it is not good.

Here are my thoughts: 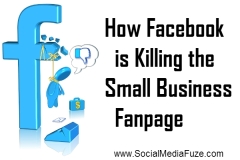 Facebook is being honest– I like that, but it’s a little bit late, almost 2 years. What Facebook is saying makes sense. As more companies are trying to fight for attention they are posting more often, writing more content and sharing more images.

Instead of people having 1500 items in their newsfeeds that Facebook uses their algorithm to sort (they deliver about 300 of that), they are probably getting more potential items in their feed queue.

The difference with Twitter is that you have options to unfollow, split up lists of people, search more intelligently and use tools like Hootsuite to manage your feed.

Now each company or fanpage that is competing gets a lower number of views in that coveted 300 news feed items section. This only makes sense that over time the number of fans (percentage wise) reached will steadily decline- indefinitely until Facebook makes a real change.

Facebook is basically telling us to go pay so that our fans see our updates. 4 problems with this for the Small Business Fanpage:

1- Very small businesses can’t afford this, or it just isn’t worth the money, but they still have fans and followers they don’t want to abandon.

2- There are only so many places these ads can be placed on Facebook, so while we might reach more people, the cost to advertise will indefinitely increase as well. This happened with Google Adwords, the more companies competing for attention, the higher the cost per click.

3- Inevitably this favors larger companies who can pay for ads and can invest in Facebook (because isn’t the Facebook IPO what this is all about?). Meaning again that large companies get the upper hand. I’m not against big corporations, but I do like to support the little guy (or people like me).

4- In a study done recently by another blog (I can’t remember their name now) they discussed howorganic likes were worth more than likes from ads. Basically the organic likes actually liked a page and were more likely to become engaged with them, while the ads were less likely.

So in paying for fans, they are worth less (in general).

Now consider that out of these fans you pay for,

you are only going to reach a % of them.

There is no guarantee that any fan you pay for will ever see even 1 of your updates. The more new pages someone likes in a day, the less likely each of those pages are to show up in the newsfeed.

(This part is from my own experience, you can try it, by going out and liking 10 pages today and seeing how many show up over the next few days. Next week like 3 on one day and compare.)

What Does All of This Mean for The Small Business Fanpage?

For businesses the cost to be present on Facebook will continue to grow, even as they are less able to keep a decent reach. It will cost more to hire someone for content, management, advertising and ads, as people continuously fight other companies for reach and exposure. It doesn’t matter what the strategy is.

If the business can handle the costs they can stay present but they will have a lower percentage of reach.

They’ll need to do the following to make the most of their presence:

Provide the very BEST content– Only pictures, links, updates, etc that truly make the fan appreciate the company will do, anything subpar will simply fall on deaf ears and lower future reach because of the lack of response.

Continually improve ads– Anyone using ads will be competing against the next company using them. There are only a few places in the newsfeed and the ad buyer who is willing to pay the most, or has the most targeted and most responded to ad, will get those positions. Bring your A-game or go home.

For Businesses That Can’t Afford It, Try These Options

I will continue helping companies with Facebook. Most of the blogging I’ve done focuses on social media in general and Facebook. The strategies I’ve used are still effective, but as this post points out Facebook will continue to be more competitive and prohibitive for small businesses.

It is up to you to decide whether it is still effective. For those who find it effective it only makes sense to stick it out until the return is no longer there. For others take one of the suggestions in this post and if you have any questions feel free to ask below.

Over the past several months I have started helping more companies with their blogs and content distribution in addition to their social media presence. In future posts I will be writing more about this, and other social media platforms where I have found higher returns on investment.

That all being said, what questions do you have? What do you think about Facebook’s announcement and where do you think the social media platform is going? Will you miss Facebook for business if you are leaving?